1982 had barely flipped a calendar page when Duncan Aviation opened its brand spankin’ new Interior shop, and 19-year-old Matt Spain was one of the shop’s first five employees.

He’d been working for a company that refurbished aircraft interiors in 1981 when his good friend Chip Mosley encouraged him to take a look at Duncan Aviation.

Matt liked what he saw, was hired by Bob McCammon. Matt began his career here on June 22, 1981 in the Paint shop, and he moved to the new Interior shop a few months later when it opened.

“On the day the new Interior shop opened its garage door, I was there,” says Matt. “We didn’t yet have a Design Center or a Cabinet shop, and we mostly did soft good replacement and Interior repairs. We fixed broken seats, hinges and armrests and installed carpet, headliners and side ledges. And we sewed. We all knew how to sew, or we learned on the job.”

Matt, who will celebrate his 34th anniversary with Duncan Aviation in June, is the only one of the original Interior shop employees who’s still at Duncan Aviation. Housed in a garage in one of the old hangars, Matt worked with Ray Butkus, Arnold Goodlett, Dennis Hansen and Mike Harris, and Mike Winters supervised the small staff.

“Ray and Arnold were 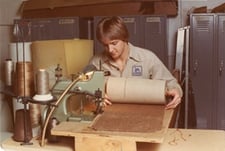 the upholstery specialists, Mike could do a little of everything, and I focused on completions and modifications,” says Matt.

During those early years, the guys in the Interior shop worked on primarily 25 and 30 series Learjets, Jetstars and Sabreliners. The biggest aircraft they touched was a GII.

“In addition to the fact that I got to work on an airplane, I loved working with my hands and seeing the difference between before and after,” says Matt. “It is so rewarding to see the look on owners’ faces when they pick up their aircraft and say ‘Wow! You guys are really good at what you do!’”

Around that time, the Interior shop and the newly acquired Cabinet shop moved from the garage to the backside of the LAI hangar (now Hangar C). Duncan Aviation also hired Interior Master Finish Specialist Steve Reznick as its first finish guy.

“Before Steve, we did whatever we could to get by,” says Matt. “He knew and taught us materials, products and methods that we just didn’t know. Steve showed us how to match stains and fix damaged areas, he introduced a whole new interior painting system and he taught us about faux finishing, too. He knew clear coats and materials that worked on wood. With his knowledge and experience, Steve took the shop to a whole new level.”

In 1985, Matt transitioned to the Interior shop Team Leader, and he says he was a man on a mission.

“As a brand new Team Leader I was a hard driver focused on getting aircraft finished and delivered on time,” says Matt. “I was learning how to be a manager and how to conduct business in a professional manner, but I had high expectations. I worked right alongside my team, but if we were told something had to be done by Friday, I’d make sure it was done by Friday no matter how many hours we had to work.”

As Duncan Aviation’s reputation grew in the industry and the Interior shop grew (by roughly 18% each year), Matt grew professionally. He was managing the Interior shop, was married and had two children, and Skip Madsen and John Slieter encouraged Matt to go to college. With tuition assistance from Duncan Aviation, Matt went to Doane College and graduated with a degree in Business Administration, with an emphasis in management.

“It was an interesting time, but my education was timely and extremely valuable,” says Matt. “I was insanely busy, but I’d go to school at night and apply the principles I had learned the next day on the floor.”

Matt began managing the Interior shop in 1991, and he oversaw the growth of the production team from 35 people to more than 200, with 28 team leaders. As business picked up and aircraft transitioned from small to mid-sized cabins, the Interior shop outgrew its space.

Members of the Interior shop, including Matt, were called upon to submit their ideas to Tectonic Management Group who asked for our input on the design and layout of the new shop. In 2001, on the day President George W. Bush was inaugurated, the Interior shop opened in its current location in Hangar D.

In 2007, Matt left the Interior shop to work with our NetJets Program.  He transitioned to Project Manager in 2009 and then on to Paint and Interior sales in 2010. He spent nearly 30 years on the production side, managing and building teams.  When Mike Minchow, then Manager of NetJets and Sales, asked him to join the sales team, Matt jumped at the opportunity.

“I often thought sales would be a good next step for me” says Matt, and he credits Senior Sales Representative in Completions and Modifications Service Sales Tracey Boesch for teaching him the art of selling interiors for Embraer and Bombardier aircraft, even though she specializes in sales for Dassault Falcons and Learjets.

“I love sales, and it’s been a welcome change from managing people,” says Matt. “The experience of working on the floor and managing people has given me an advantage in sales, though. I know what we’re capable of, and I know what questions to ask. From a customer’s perspective, the whole process should be seamless from proposal to production. In order to offer that kind of experience, it’s important that we sales people ask the production folks a lot of questions. Learn from them; let them help you when you’re writing a quote. Go and ask them questions.”

The Interior Mods/Completions shop is in Manager Jared Stauffer’s capable hands now, and in partnership with the Duncan Aviation Design Center, offers custom designs by professional designers, quality products and meticulous attention to detail. Over the years, the Interior shop has evolved from its humble beginnings to a production crew that’s capable of refurbishing headliners, building custom cabinets, upholstering chairs and divans, constructing executive tables, and much more.