A Connected Business Aircraft: What Wi-Fi Options Are Available? 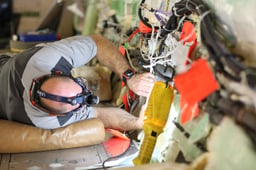 The avionics experts at Duncan Aviation know that most passengers aboard business aircraft want to stay connected as they travel. A connected aircraft lets cabin passengers access the internet in flight.

Our experts have been advising owner/operators for years about the connection options that are available. This year, there are new connectivity options that offer far greater speeds than in the past.

“Factors such as where you operate your aircraft, the type of aircraft, and passengers’ internet needs dictate the type of system to install,” says Duncan Aviation’s Avionics Service and Sales Rep Steve Elofson. “When it comes to aircraft connectivity today, you have plenty of options.”

So many, it can get a bit confusing if you’re not an avionics expert, so we’ll give you the rundown of what’s available. Satellite-based services keep you connected on global flights, and terrestrial-based systems cover your flights throughout the continental United States and in parts of Canada.

Connected Over US Airspace

For flight over the continental United States, Gogo Biz’s 3G ATG (air-to-ground), terrestrial-based network features speeds of up to 3.1mbps and has affordable data plans and STCs (Supplemental Type Certificates) for nearly every make and model of aircraft.

Two companies with 4G networks are expanding their services through this year and in 2018. Covering the United States and parts of Canada, Gogo Biz’s 4G AVANCE L5 system reaches download speeds between 5-9mbps and is available now in certain aircraft, with STCs for many others in the works.

Duncan Aviation has developed an STC for the AVANCE L5 system, which covers the Wi-Fi certification, full equipment, and antenna installation, for multiple large-cabin Gulfstream models and will have STCs for the Dassault Falcon 900 and 2000 series and the Bombardier Challenger 600 and 300 series aircraft in early 2018.

SmartSky’s network is true 4G LTE and offers performance similar to using smartphones over cellular networks. Service covers most of the continental US in 2018 and will expand to the rest in 2019.

As with our home electronics, new equipment and advancements in technology are fairly typical in the aviation industry, too. Business jet travelers want higher speeds, and service providers comply by upgrading infrastructure and equipment.

Taking advantage of faster speeds usually requires new equipment. STCs are a good idea and often required for this equipment. Find out which makes and models are covered by existing STCs before upgrading to a new service. If your make/model is not covered by an existing STC, one can be developed, which requires additional downtime.

As mentioned, services for some systems are available only in the continental United States, so if you regularly fly outside of the United States, you’ll want to invest in a global satellite system.

When you’re ready to fully connect your aircraft, give the knowledgeable Avionics Service and Sales Representatives at Duncan Aviation a call or visit our web site for more information: www.duncanaviation.aero/services/avionics-installation.