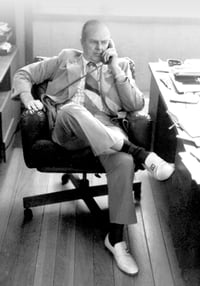 Iowa farmer and automobile salesman Donald Duncan learned how to fly in the 1950s. As he gained aircraft experience and developed deep friendships with aviators, he heard business operators asking to utilize aircraft as business tools. In 1956, he acted, buying into the Omaha, Nebraska, Beechcraft dealership that would become Duncan Aviation.

In addition to selling aircraft, Donald used them extensively as he spent two years commuting daily from his home in Clarinda, Iowa, to Omaha. One day, while preparing for the commute, Donald’s aircraft experienced a technical issue and he became intimately familiar with the term AOG.

Harry Barr, now Duncan Aviation’s Senior Captain and its longest-employed team member at 58 years, came over to help Donald. During the course of conversation, Donald discovered that Harry’s radio needed work. Donald had the connections to get the radio fixed and Harry had an operational airplane that could get Donald to Omaha.

In addition, Donald’s word was his bond; he never went back on a deal. Once Donald committed, the entire resources of Duncan Aviation were also committed to making the deal work for the customer and the company. And although Duncan Aviation drew up written contracts, when a deal was made over the phone or with a handshake, it, too, was considered solid.

“Donald could read a customer better than anybody I’ve ever known,” remembers  J. Robert Duncan, Chairman Emeritus of Duncan Aviation and son of Donald Duncan. “He demonstrated great care and concern for his customers, and he always seemed to understand what their needs were.”

In addition to his ability to listen to customers and act to meet their needs, Donald had a strong sense of  creativity, drive and integrity. And he planted those seeds within the early company culture at Duncan Aviation, where those values continue to provide the solid foundation on which Duncan Aviation’s reputation rests.

Largely through the efforts of Donald Duncan, an entire generation of businesses learned what kind of freedom and flexibility could be attained through owning a business aircraft.