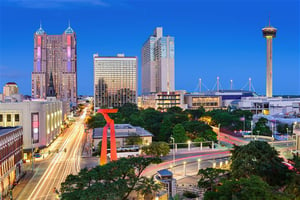 Today, Duncan Aviation opens a new office at the San Antonio International Airport in Texas. In an effort to position our skilled avionics technician in closer proximity to customers, Greg Ashpaugh, is moving to San Antonio and will be the Manager of the new work-away location.

“Over the years, numerous customers have asked us to consider a work-away location in San Antonio,” says Matt Nelson, Manager of Satellite Operations. “After assessing the city and airport, we agree that San Antonio is a great place for a Duncan Aviation technician. Not only does the mix of aircraft based at that airport closely match our business model, but also the city of San Antonio is attractive because of its strong, diverse economic base.”

Greg—until recently Crew-Lead at the Dallas satellite avionics facility—is looking forward to working on customers’ aircraft in and around San Antonio. While working as an aircraft engine mechanic on E-2 Hawkeyes and C-2 Greyhounds in the US Navy for six years, Greg earned his A&P license at the Sierra Academy of Aeronautics in Oakland, California.

After his service, Greg worked at various avionics shops in the Dallas area before hiring on at the Duncan Aviation Dallas Satellite avionics facility 13 years ago.

“In addition to really liking what I do, I think Duncan Aviation is a great place to work,” says Greg. “The company takes care of us, and it has been very, very good to me.”

From the Dallas Satellite facility, Greg traveled to work on aircraft in San Antonio, Austin, and Fort Worth in Texas, as well as to New Orleans, Louisiana. He anticipates that he’ll continue to travel from his new work-away location. “We’re here for our customers, wherever here is,” says Greg.

Located on the southeast side of the San Antonio International Airport, the new office will let Greg focus on line maintenance, AOG, and small install work.

Duncan Aviation's Avionics Satellite shops are strategically based at more than 25 business aviation airports across the United States. Each location is interdependent, sharing staff and resources to support customers anywhere they land, live or hangar their aircraft.