Circa 1963: Duncan Aviation Opens and Consolidates in Lincoln, Nebraska

In the early 1960s, Donald Duncan was operating a Beechcraft distributorship in Omaha, Nebraska. Business airplanes at the time couldn’t fly nonstop from one coast to the other. Donald’s customers expressed the desire to have an executive lounge and meeting spaces available at a centrally located fuel stop.

In 1963, the city of Lincoln, Nebraska, was developing a new Municipal Airport for general aviation. Donald acted and built a first-class facility with a warm reception area, a plush executive lounge, a flight planning room, and catering services. In addition, the facility boasted hangar space for complete, certified aircraft maintenance and repair.

In 1965, Donald’s son, Robert Duncan, was fresh out of college and began working at Duncan Aviation. He flew charters, pumped fuel, swept floors and answered telephones. Duncan Aviation had only 15 employees and was just beginning its transformation from an aircraft sales organization to what would become its future: aircraft service and support. 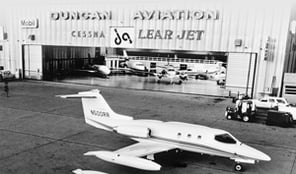 They have been breaking ground in Lincoln, Nebraska, ever since

Donald’s reputation for fair deals and excellent customer service, which so impressed buyers of new aircraft, now impressed those who needed servicing of those same aircraft. Knowledgeable people in the industry began to talk about the small aviation company located in the central plains of the United States. And Duncan Aviation became the place to receive aircraft maintenance and excellent service.

Soon the company had 200 team members, then 300 and 400. But one thing remained consistent: a team philosophy that included listening to customers and acting to meet their needs.