Hero Flight Takes Off From Duncan Aviation in Battle Creek 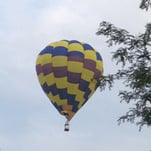 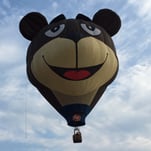 Over W. K. Kellogg airport in Battle Creek, Michigan, the skies are filling with hot air balloons as the 2015 Field Of Flight Air Show and Balloon Festival kicked off yesterday. Over the weekend, everyone in the area will be looking up to watch as colorful hot air balloons float peacefully by. The launches will take place at the airport and other various locations around Battle Creek.

Watch Sugar Bear inflate to life in this photo series

Also taking to the air over the July 4th weekend will be several aerobatic stunt planes performing for the air show. These brave pilots and their agile planes began arriving at Duncan Aviation on Wednesday ahead of the main event.

Just prior to the public airshow, one local World War II Veteran got the ride of his life with Aerobatic Champion and airshow pilot Rob Holland. Together with sponsor Window World, Rob created the Hero Flight Program as a way of giving back to the U.S. military veterans for their service and sacrifice.

This year’s World War II Veteran is Ken Rabbit. He was in the Army Air Corps in the legendary 8th Air Force as a ground crewman, working on B24s, B17s and C47s. Ken was also a pilot, once owning a Stearman Biplane. He just turned 90 years old.

Ken and his wife, Pat met with Rob prior to the flight in Duncan Aviation’s Battle Creek lobby. 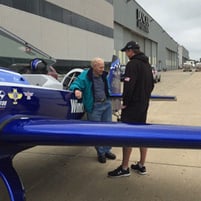 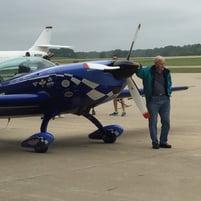