3 Factors That Affect the Value of a Winglet Modification 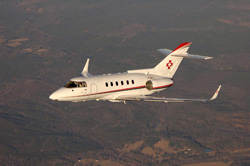 What is the value of increasing your flight capabilities? For Hawker 800 series, winglets allow you to fly non-stop across the US, or comfortably reach Jeddah from Paris. You can also complete shorter missions with greater payload and fuel reserves... without buying a new aircraft.

Residual value, perceived value and fuel savings are important factors to consider when calculating the return on investment for a winglet modification.

Winglets are quickly becoming a standard. As the number of winglet-equipped aircraft on the resale market increases, Gary speculates it will become increasingly difficult to sell an in-service aircraft with conventional wingtips.

Gary explains that in the case of the Gulfstream II, 70% of the fleet is now equipped with Aviation Partner’s winglets. “It became a standard,” he says. “We’re seeing a similar trend on the Hawker 800 series. It’s becoming a piece of equipment that people expect.”

The longer range, improved cruising speeds and fuel efficiency realized through a winglet modification is far more cost effective than upgrading to an aircraft with similar capabilities.

For tips on managing the cost of a winglet installation, look for next week’s blended winglet blog post.

Find out more about Falcon 2000 series winglets and Hawker 800 series winglets at www.DuncanAviation.aero/airframe. Or contact a member of Duncan Aviation’s Falcon or Hawker Airframe Service Sales team for information about our winglet installation capabilities.