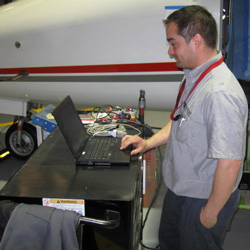 It is not uncommon for me to receive a phone from an operator flying with a TFE731 engine asking me to review their engine downloads. After several flights the engine computer light begins to flash and the only fault they can see is fault code 237, ECTM Buffer Filled. They want to know why they are getting this. In all cases after reviewing the engine downloads, I found they all have an uncommanded engine shutdown logged. This triggers an event record, which in turn causes the engine computer light to flash.

What causes a fault code 237 on engine start up?

An uncommanded engine shutdown occurs during engine start when the throttle is brought out of cutoff and advanced past the idle position and then back again. This causes the uncommanded engine shutdown to be recorded in the DEEC and causing the computer light to flash. To prevent an unnecessary engine download, cautiously bring the throttle from cutoff to idle without advancing it past idle.