At Duncan Aviation, AOG Means “We Will Make This Work.” 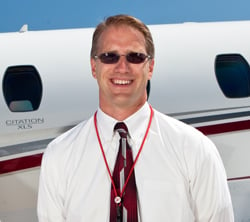 "It doesn't matter when I call...late at night or over the weekend, Duncan Aviation has a bunch of people who really care…."
Jad Donaldson, Chief Pilot for Avfuel.

As they prepped the Citation for the flight back to Ann Arbor, they saw a yellow Crew Alerting System (CAS) message, stating LH ENGINE CONTROL FAULT (ECF).

After discussing the CAS message, they shut down the entire aircraft, including powering off and pulling the battery. When they restarted the battery switch, 45 seconds in, the ECF message appeared again.

“We were AOG,” says Jad, “so I immediately called Jayme Park, the Airframe Alternate-Shift Supervisor at Duncan Aviation in Battle Creek, who has spent the last 17 years helping Duncan Aviation customers resolve their maintenance issues.

Bill Walker, Engine Tech Rep in Battle Creek, was confident that the codes indicated a multiple-level power supply failure on the motherboard in the engine computer.

Jad called Co-Captain Jeff Squires to prep Avfuel’s second aircraft. Jeff flew from Ann Arbor to Battle Creek to pick up Aaron LaClair, a Duncan Aviation Engine Tech, on to Muskegon to get the new EEC and then to Harbor Springs.Within 15 minutes, Jayme had located the necessary EEC and set about gathering and processing the necessary paperwork to prepare the aircraft for eventual signoff and return to service.

Five and a half hours after Jad received the error code, Aaron was on the ramp, downloading the data from the Citation’s left-hand engine’s DCU.

Jad has a saying: Usually when people make something look easy, it’s not because it is easy but because they work so hard and have the necessary knowledge and experience to do the work right. He says, “Everyone I’ve worked with at Duncan Aviation has exhibited this principle. They work hard, and they have the knowledge and experience to stick with a problem and resolve it.”

That perseverance paid off. Around 2 a.m., Aaron and Jad pulled the functioning right-hand EEC, swapped it into the left-hand engine, and put the new part in the right-hand engine. By 3:45 a.m., when Jad brought the Citation back online, the onboard maintenance diagnostics returned no error codes, the TLD screen showed an N for both engines, and the channel assignments were normal.

The aircraft was no longer AOG, and there was still a little time to get back to the hotel and get some sleep before the day of shuttling passengers began.

Jad says, "We at Avfuel are fortunate to have access to technicians like Jayme Park. Jayme jumped in and used her leverage, intelligence and experience to get this issue resolved. I'm also fortunate to have the relationship I do with Duncan Aviation—it's like having my very own maintenance team. It doesn't matter when I call, either; whether it's late at night or over the weekend, Duncan Aviation has a bunch of people who really care… people like Jayme who are passionate about what they do and do everything they have to do to take care of their customers."

You read more details about this story in the Spring 2014 Duncan Debrief.