Duncan Aviation takes the long-term approach when it comes to investing in the company, and it has paid off more than 250 times in the paint shop alone.Two years ago, the Lincoln, Nebraska, team celebrated the opening of a 45,000-square-foot aircraft paint facility after observing the current customer base’s shift toward larger aircraft and anticipating that trend had staying power.

“We designed the facility so it has the ability to house multiple aircraft at once—so the paint teams can strip, sand, paint and detail work on several projects simultaneously,” says Paint Manager Doug Bohac. “It also includes a down-draft bay and several other green options that allow us to do more with less of an impact on the environment.”

With 150 paint team members between the Lincoln and Battle Creek, Michigan, facilities, they’ve built quite the reputation for themselves, and with nearly 4,500 paint deliveries during the past few decades, it’s no wonder.

“We make most any paint request a reality and the paint teams really take pride in their work. They make sure it’s done right the first time, and that’s what keeps people returning,” says Bohac.

Customers are coming back, and they’re providing rave reviews.

The Lincoln paint team recently completed one of the most complicated paint schemes on one of the largest jets to grace the facility. It took some creative thinking on the part of the design team and several weeks, but Nataly and Ernst Langner, owners and pilots of the jet, were ecstatic.

“Duncan Aviation is producing a quality I’ve never seen in the industry. This is the best job I have seen in 50 years,” says Ernst Langner. 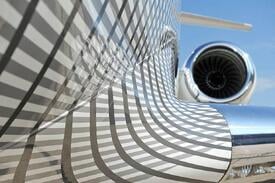 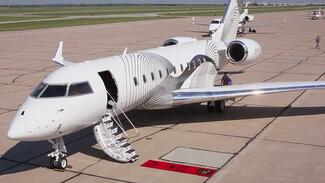 View the paint team in action on the Langer’s jet. 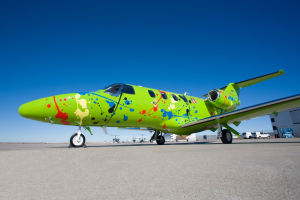