Duncan Aviation’s Provo, Utah, facility both gave and received an early Christmas present this year in the guise of an Embraer Legacy 144-month (L24) inspection. During this inspection, we restored the landing gear and installed an Aircell ATG5000 cabin Wi-Fi system, among many other smaller items.

Another challenge resulted from a missing aircraft Electrical Load Analysis (ELA) document. The ELA is comparable to the aircraft Weight and Balance Manual—only it’s for the aircraft electrical system. Our avionics install team worked with our Embraer contacts and procured a manual for this serial number in time for our team to perform the final calculations and produce the appropriate paperwork on our end for delivery.

To limit yet maximize downtime for this popular charter aircraft, our interior team worked with the customer on which repairs we could accomplish after the interior was removed for the inspection. The team ended up finishing several high-profile pieces of woodwork and had everything looking like new by the time installation day rolled around.

As often happens, a couple of gremlins dogged the final day—a landing light burned out and a flow pack gave up just before delivery. Troubleshooting and procuring parts ended up pushing delivery back a day, but the aircraft arrived at its home on Tuesday, December 23.

Once home in Scottsdale, the delivery gremlins reappeared; this time, an APU issue sent our Scottsdale Rapid Response team into action and they resolved the issue by early the following morning.

One of the things that really shined through to our customer with this project was the way Duncan Aviation as a team banded together to support them no matter what facility they were in. This aircraft was worked on in our Provo facility, the landing gear was completed at our Lincoln location and when the aircraft needed after-delivery support in Scottsdale, our Rapid Response team there was quick to respond. This inspection was a true multi-shop, multi-site success story.

Since becoming a Legacy Authorized Service Center, we’ve completed several types of inspections, including L1, L2, L4, and this most recent L24.

Jeff Schipper is a Project Manager at Duncan Aviation's Provo, Utah, facility serving as the central point of contact for his customers' projects ensuring overall project quality and timely aircraft delivery. His aviation career began in 1987. 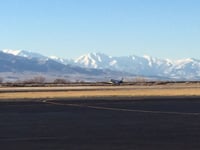 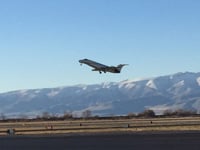 The Embraer Legacy takes off from Duncan Aviation's picturesque view in Provo, Utah.