Wi-Fi in the Sky: What's Involved with an Inflight Internet Install? 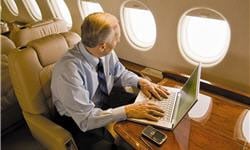 The phrase “office in the sky” dates back to when passengers were first able to pick up a phone while in the air and make a call to anywhere in the world. Now for the first time ever, another major milestone: "wi-fi in the sky," or the ability to use high speed internet while airborne.

So how is inflight internet accomplished and what does it take to install? I was interviewed for a recent Aviation Week blog post "Clearing WiFi To Fly," in which Paul Seidenman and David J. Spanovich explain that lots of testing is involved.

"The current approval route for onboard WiFi equipment on U.S. registered aircraft is through an “issue paper,”... which spells out the testing procedure that the installer must follow to assure that the WiFi equipment—the router, transceivers, associated wiring and external antenna—will perform its intended function and shield the aircraft’s electronics from any interference from a portable electronic device.

"According to the FAA, the aircraft’s operating certificate holder is the only one who can [qualify the aircraft as transmitting portable electronic device-tolerant], based on the testing done by a maintenance provider."

In the post, I explain that a multi-step testing process is necessary and rigorous. Technicians place "rogue transmitters" at each seat in the aircraft to simulate passenger wireless device connectivity with the inflight Wi-Fi suite.

The test is specific to each aircraft make, model and avionics configuration. Technicians carefully document the procedure and any abnormalities with the aircraft's electronics, which becomes part of the STC application.

"...[A]n STC for WiFi... enters a multi-step approval process, which begins at field level and concludes at the FAA’s Transport Directorate Office in Seattle. For a number of shops, especially those without organization designation authority [ODA], that could mean getting into a sequencing situation and as much as a 90-day waiting period, depending on field office work load."

I also recommend reading Duncan Aviation's press releases on the completion of the first STC for Aircell's Wi-Fi system in a Challenger 300, and our Organization Designation Authorization (ODA) approval.