Todd Duncan: Where the Past, Present and Future Converge 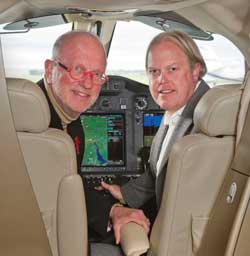 Being a part of a multi-generational family-owned company makes a person well aware of the sacrifice and effort of those who came before him. This lesson is not lost on Todd Duncan, Duncan Aviation’s Chairman and the third generation of the Duncan family to assume the helm.

Todd grew up watching his grandfather, Donald Duncan work hard to create and foster the growth of a small Beechcraft dealership, buying and selling aircraft from the middle of the United States. He then worked for and alongside his father, Chairman Emeritus Robert Duncan, as the company continued to grow and transition from aircraft sales to service maintenance. It was in 2007 when Todd assumed the role as Chairman of Duncan Aviation and took over the leadership of the company. Today, Duncan Aviation is the largest family-owned business aviation MRO in the world, servicing customers around the globe.

Todd knows that the foundation upon which Duncan Aviation was built began well before his grandfather bought his first aircraft. It started with the innovation and perseverance of a pair of brothers who wouldn’t give up and learn lessons from mistakes and setbacks, until they took to the skies for the very first successful sustained flight.

On a trip to North Carolina, Todd stopped by the Wright Brothers’ National Memorial in Kill Devil Hills. You can read his personal account of the trip and how aviation’s history has affected his role at Duncan Aviation in the Fall 2013 issue of the Duncan Debrief.

You can read about Donald Duncan and the history of Duncan Aviation is the 50th Anniversary Edition of the Duncan Debrief written in 2006.