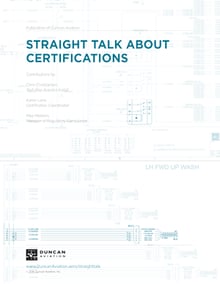 Feelings about aircraft certification vary depending on whether you own and operate the aircraft or you’re a passenger on it. Passengers want to know that the metal object in which they’re encased as they fly through the air is demonstrably and certifiably safe. Owners and operators, on the other hand, sometimes feel stymied by the reams of paperwork and data necessary to make sure the aircraft they operate is safe.

In spite of that frustration, however, owners and operators share the goals of the regulators to promote safety throughout the lifecycle of their aircraft, from the design and production of the aircraft to its entry into service and continued safe operation. Additionally, owners and operators must keep their aircraft airworthy (meaning it meets its type design and is in a condition for safe operation) by maintaining and operating it according to its airworthiness type certification and operating limitations.

What Is Airworthiness Certification?

That means that a Type-Certificated aircraft is able to operate as long as the aircraft conforms to its approved type design, is in safe-operating condition, and has had all of its preventative maintenance and any alterations performed according to the applicable US Code of Federal Regulations. The Standard Airworthiness Certificate must be displayed in the aircraft.

To secure this authorization, an owner (or an owner’s legal agent) must apply to the FAA. Before doing so, however, the aircraft must have a TCDS (Type Certificate Data Sheet). Think of a TCDS as a kind of birth certificate for the airplane. This document defines the aircraft’s configuration, powerplant, equipment, intended use, and other characteristics.

When an airplane first enters into service, it must be in compliance with the Type Certificate of the stated design (make/model). Issued by the FAA, the Type Certificate determines an airplane’s operating limitations and shows that the aircraft’s design meets the FAA’s airworthiness requirements. This means that the aircraft has met the standards for safe handling, structural integrity, system reliability, and other characteristics.

Airworthiness means that this aircraft has been shown to conform to its type design and has been documented as safe. Airworthiness means, for instance, that owners, operators, and passengers can get in and fly 600 mph at 35,000 feet and feel that they are in a safe machine.

We go into greater detail more explanation about type design, airworthiness, and operating limitations in our Straight Talk About Certification. Here’s what you’ll find.

Duncan Aviation continuously strives to be the voice of clarity in the acronym-happy aviation industry. Our free Straight Talk books are an aircraft operator's source for information about important topics in business aviation, and are written in clear, concise, no-nonsense language.