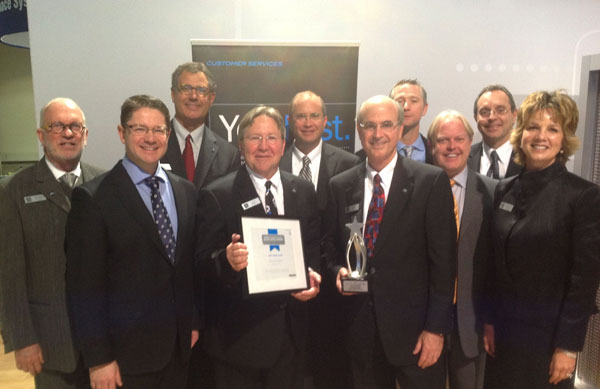 At the beginning of the 65th Annual National Business Aviation Association (NBAA) Meeting and Convention in Orlando, FL, Duncan Aviation was again recognized by Bombardier as a top authorized service facility for its support of Bombardier customers for 2012. Judged on a set of criteria that included quality, compliance, customer satisfaction and customer influence, Duncan Aviation’s Battle Creek, MI, facility was named the winner of the North America category of the Bombardier Authorized Service Facility Excellence Awards.

Bombardier President Eric Martel spoke to the award winners at a private ceremony at NBAA. “Our ASFs are very important to us. You represent us well and raise the bar for everyone else every year. What we do depends on what you do.”

“We enjoy representing Bombardier and their products in supporting of our mutual customers. It is a great mutually beneficial partnership that has worked for many years,” says Tom Burt.

Visit www.DuncanAviation.aero/nbaa for booth information and the latest resources.

Diane Heiserman leads Duncan Aviation's blog, and is currently attending NBAA 2012 at Duncan Aviation booth #5580. She began her career in aviation in 2006.