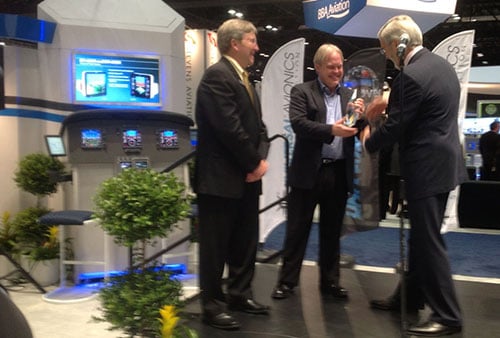 Today during the 65th annual National Business Aviation Association (NBAA) Meeting and Convention, Universal Avionics awarded Duncan Aviation the Top Dealer in North America for 2012. This award represents the outstanding sales performance of only one North American Universal Avionics dealer out of the several hundred in its Authorized Dealer Network.

President and CEO of Universal Avionics, Ted Naimer, presented the Top Dealer award to Todd Duncan, Duncan Aviation Chairman and John Slieter, VP of Sales and Marketing. Naimer expressed his appreciation of the Universal Dealer network and the important role that they play. “Our dealers help make us what we are today. We are successful because of them.”

Diane Heiserman leads Duncan Aviation's blog, and is currently attending NBAA 2012 at Duncan Aviation booth #5580. She began her career in aviation in 2006.