The autopilot is a vital component on an aircraft. When it isn’t functioning properly, there can be all kinds of problems. There aren’t many places where operators can find the autopilot knowledge, experience and technical expertise all in one place.

What if operators could create their own autopilot team? They would be able to troubleshoot the system in the aircraft more efficiently, ensure the right box or boxes are removed for repair, access autopilot loaners while equipment is in for repair and schedule appropriate turn times.

Here are three criteria to look for when selecting an autopilot support center.

Customer service is very important when an autopilot needs to be repaired. Account reps should be intimately familiar with scheduling and turn times associated with different types of autopilot equipment. They should also maintain good communication with avionics teams, and be knowledgeable about which technicians are most experienced with the autopilot specific to an operator’s aircraft. If the need arises, they should also be able to connect an operator directly to the avionics tech to clarify squawk information or quote options.

Managing a team of autopilot technicians, coordinating test equipment and ensuring downtimes are met has its challenges. Verifying a squawk for a simple function check can exceed eight hours on some a/p computers. A skilled autopilot team leader can use their resources effectively to repair and return an autopilot on time and on budget.

3 Factors to Determine When to Use Mobile Aircraft Services 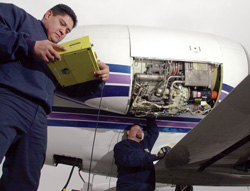 Mobile service units are in the headlines a lot these days. Most of the big aircraft service names have them and there are also a lot of smaller operations throughout the United States. They offer everything from cleaning to AOG emergencies to engine changes and even major inspections.

So, how do you know when mobile aircraft service is a good option for you? Here are three things to consider:

Sometimes a road team will be able to solve a problem faster than you can, and can reach you in a time frame that may compete with a full-service facility's onsite availability.

This is true for troubleshooting and AOG parts situations. You can get the team and the parts to your location in relatively short order and be back in the air in no time. However, for larger jobs, it may take a road team longer than a full team at a service center. Two or three guys working dozens of labor hours will just take longer than five to six guys working an inspection on round-the clock shifts.

Using road teams spares you the cost of moving your airplane to a full-service facility, and for someone to travel with it to watch over the maintenance. A mobile team can be a good solution for an in-house team that needs a day or two of technical or heavy help, but can handle the rest of the inspection on their own.

However, road teams cost more. You are paying for their time, door-to-door service and in many cases their expenses. Convenience costs more.

What if an inspection uncovers something that needs more time, tools, parts or expertise to fix? The short answer is you are most likely in for more downtime. For instance, a cracked window. A repair in the field would extend the downtime, while a repair at a full-service facility would not.

So, consider your options and choose wisely. Sometimes service from a professional team in your hangar can be a real benefit. And sometimes it's just better to take your aircraft to a full-service facility. The great news is you have the choice!

Dennis VanStrien is an Airframe Service Sales Rep at Duncan Aviation's Battle Creek, Mich. facility, and specializes in Citation aircraft. He began working in aviation in 1976.

The Five Most Exotic Duncan Aviation Road Trips of 2010 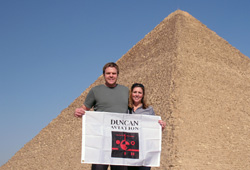 After working with the Egyptian Air Force on engine training for their Falcon 20, Engine Tech Rep Shane Heier and his wife Katie took a few days to travel Egypt.

Duncan Aviation provides emergency AOG support to grounded aircraft nearly anywhere in the world, making hundreds of service trips a year. In 2010, team members traveled to some of the most exotic locales including such places as Puerto Vallarta, Mexico; Guayaquil, Ecuador; Merida, Mexico; Cairo, Egypt and St. George, Bermuda. While providing the most-needed AOG services to our customers at their location, team members also took in some local culture, food and sites.

In the spring of 2010, avionics tech Gene Dannenberger flew from the Duncan Aviation avionics satellite shop in Sacramento, Cal., to Puerto Vallarta, Mexico, to install a Duncan Aviation repaired radar system in a Jetstar. While there, Gene took advantage of the wonderful weather to become a sightseer at many of the local tourist spots including downtown Puerto Vallarta, the marina and of course, the beach.

While performing this routine maintenance, he was entertained throughout the day with music playing in some nearby trees and was visited by a couple of armed airport guards who came out to watch the radar change.

A quick trip to Ecuador for one Duncan Aviation Engine Rapid Response Team (RRT) technician turned out to be more than expected one day in July. After arriving, Karl Johnson, Rapid Response Team Leader from Fort Lauderdale, Fla. went to work troubleshooting the squawk and quickly discovered a faulty oil pump. James Holmes, an engine tech also from the Fort Lauderdale RRT, hand-delivered the part in order to complete the project on time for the customer. Together they completed the maintenance and headed back to Florida, arriving at 6 a.m. the next morning.

In reflection, Karl admitted that the trip was too short and had he been able to stay longer would have visited a local establishment known for having great steaks.

Karl's trip to Central America didn’t end in Ecuador. He took three separate trips to Merida, Mexico in a span of about two months. What began as a fuel control change turned into troubleshooting for a compressor stall. Finally, the project came full circle with an engine change two weeks later.

This trip, even with the short time and busy schedule, Karl did find time to enjoy the nice people and good food of Merida, Mexico. “I didn’t have the extra time to learn about the area and culture, but I now know how to drink a Mexican beer the right way.”

If he ever gets the opportunity to return, Karl hopes to visit the Mayan Pyramids.

Shane Heier, an Engine Tech Rep out of Lincoln, Neb. traveled over 4,000 miles to Cairo, Egypt not once, but twice in 2010. For six days in the heart of the Arabian Desert, Shane’s first trip provided the Egyptian Air Force LRU training for the Honeywell TFE731-5BR engine on their Falcon 20.

Taking advantage of his time in Egypt, he and his wife Katie stayed an extra couple days traveling the region and exploring a land rich in history. Their adventures took them to the Pyramids of Giza, the Cairo Museum, a church in Coptic Cairo and a visit to the Alexandria Library of Alexandria located along the Mediterranean Sea.

A month later, Shane got the chance to visit Cairo again and was accompanied this time by Jeff Sikes, RRT engine tech from Scottsdale, Ariz. Duncan Aviation's Rapid Response Teams support AOG engine emergencies in addition to most scheduled and unscheduled events, including engine changes and that is exactly what brought the two to Cairo. They were dispatched to change an engine for a Dassault Falcon 20 aircraft onsite.

Shane’s time in Egypt was an experience he will not forget and remarks that he would visit again if given the chance.

A quick trip to change an igniter box meant a short get away for Engine Line lead technician, Eric Perez. Eric was dispatched from Lincoln to St. George for work on a Falcon 50EX.

The trip was short, not allowing much time for sight seeing, but Eric enjoyed his stay at Grotto Bay Beach Resort and the chance to experience the beauty of Bermuda.

Erin Hart is a Duncan Aviation Apprentice working in the Marketing Communications department at the Lincoln Nebraska facility. She began working in aviation in 2007.