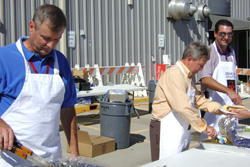 One of Duncan Aviation’s "Core Values" reads "Support our communities and encourage volunteerism." This isn’t just a passive statement; it is lived out loud daily among many Duncan Aviation team members with the full support of members of the Senior Management Team.

For more than 20 years, Duncan Aviation has held annual fundraisers to support United Way. Today, we kick off the beginning of this year's United Way campaign with a free-will appreciation lunch at our Lincoln, NE, and Battle Creek, MI, locations. While we enjoy all the planned activities, we keep in mind the ultimate purpose: that the residents of our communities have hope for a better life tomorrow because we choose to participate to make a difference today.

When members of our community face hardships, we are all affected. The good news is that we can join together, neighbor helping neighbor, to make a difference. It all starts with us, because we We Live United!

Cessna owners came together on July 17, 2010, to transport Special Olympics athletes and coaches from across the United States to Lincoln, Nebraska.

A plane landed every 60/90 seconds to bring 800+ athletes by corporate jet to the USA National Games in Lincoln, Nebraska.

A Part of Something Bigger: Cessna Citation Special Olympics Airlift

Here I am with Robert Duncan standing next to Dove 1.

It didn't take me long to realize I was a part of something big, bigger than myself, bigger than the company I work for and the community in which I live. This is the opening weekend of the Special Olympics National Games in Lincoln, Nebraska, marking only the second time the National Games have been held in the United States.

The games will officially kick off at the opening ceremony on Sunday, July 18, at the Bob Devaney Sports Center in downtown Lincoln, Nebraska. However, the excitement begins with the first contingency of athletes arriving tomorrow morning at 7:28 a.m. at the Lincoln Airport as part of the Cessna Citation Special Olympics Airlift. For eight hours, 165 Citations will be flying 800+ athletes and coaches in from 28 different states. There will be an aircraft landing every two minutes. Each flight coming in is assigned the "Dove" call sign and given priority handling by air traffic control.

For two years, a small group of dedicated Duncan Aviation team members have worked tirelessly discussing, planning, organizing and implementing plans to make sure the airlift ground support operations go off without a hitch. But Duncan Aviation is not alone. We are only part of a larger team made up of Cessna Aircraft Co., FAA, Lincoln Airport Authority, Lincoln Chamber of Commerce Convention and Visitors Bureau, among a long list of other very important volunteers. Hundreds will be on hand to greet each flight, unload the athletes, handle the 5,600 pieces of luggage and refuel the aircraft. Hundreds more will be welcoming the athletes to the games and cheering them on to victory.

If you are in Lincoln tomorrow, make plans to stop by and witness what could be one of the most trafficked events in Nebraska history, according to the FAA. If you miss it, don't worry. There will be a second showing, only in reverse when the Dove flights take to the air again to return athletes to their home states.

My part in this whole process has been quite small, minuscule in fact when compared to the magnitude of the entire event and the sheer number of volunteers that have pledged their time and talents to support the games. But it's not about the airlift or the volunteers. It's not about the community support or corporate sponsorship.

It's about the athletes. And that's all it's about.