Everyone at Duncan Aviation laughed along with most of the rest of the business aviation industry on April Fool’s Day when the spoof press release claimed the deadline for the Automatic Dependent Surveillance-Broadcast (ADS-B) mandate had been extended until 2040. Not long after the laughter died down, though, the FAA reiterated that the agency’s deadline will not change, saying, “We have a sense of humor, too, but an April Fool’s joke that the FAA is extending the ADS-B deadline is just that.”

The FAA went on to say:

As stated in the final rule published with industry input in May 2010, all aircraft flying in designated controlled airspace—generally the same busy airspace where transponders are currently required—must be equipped with ADS-B Out avionics by Jan. 1, 2020. Only aircraft that fly in uncontrolled airspace, and aircraft without electrical systems, such as balloons and gliders, are exempt from the mandate.

The joke brought attention to the rumor mill that has consistently insisted that the FAA will delay the deadline. Not only did the FAA take the opportunity to squelch those rumors, but it also reminded the businees aviation industry that there are only 21 months remaining until the mandate deadline. 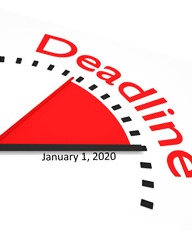 Because time flies and aircraft without ADS-B probably won’t after the deadline, Duncan Aviation would like to remind its customers that the company has numerous certified paths to upgrade equipment to comply with the FAA’s ADS-B mandate. Duncan Aviation holds (or has access to) 42 STCs for dozens of aircraft models.

Additionally, the experienced avionics installation techs at the three main facilities (in Battle Creek, Michigan; Lincoln, Nebraska; and Provo, Utah) and at all 26 Duncan Aviation Avionics Satellite Shops and workaway stations throughout the country have performed hundreds of upgrades during the last several years, often combining the upgrade to ADS-B with inspections and other routine maintenance to condense downtime.

The company currently has space available for ADS-B work. Call the shop nearest you to schedule a time to upgrade your aircraft or fleet (www.duncanaviation.aero/locations/#satellites).