Awards & Accolades For A Duncan-Aviation Legend

In 2017, the NAHI (National Aviation Heritage Invitational) invited Duncan Aviation customer Joe Duke to enter his refurbished Albatross aircraft in its prestigious airplane show. Rescued by Joe in 2008, the 1954 G-111 Grumman Albatross had spent more than a quarter of a century in the boneyard at Pinal Airpark in Arizona. Joe and his team restored the aircraft to airworthy condition and painted it with glossy paint in elegant, understated colors. Then in 2015, the aircraft came to Duncan Aviation for a stunning interior transformation.

The vision and mission of the NAHI is to encourage the preservation of aviation history through the restoration of vintage aircraft to original flying condition. The Invitational promotes aircraft restoration via friendly competition, bringing valuable aviation treasures together in one venue and is a joint effort of Rolls-Royce North America Inc., the National Aviation Hall of Fame, the Reno Air Racing Foundation and the Smithsonian National Air and Space Museum.

The timing of this year’s show at the California Capital Airshow couldn’t have been better. As hurricane Irma raged through the Caribbean toward their Florida home, Joe and the Albatross were safely away from the devastating storm at the Mather Airport in Sacramento, California.

It wasn’t Joe’s first time at the show. In 2013, Joe was invited to enter the Albatross in the show, which at the time was part of the National Championship Air Races in Reno, Nevada. Judges bestowed the Howard Hughes Trophy (Large Aircraft) on Joe and the Albatross, and they also went home with the National Aviation Hall of Fame People’s Choice Award. 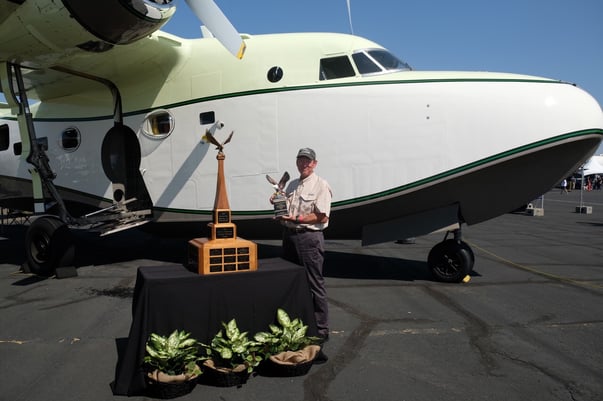 This time, the Albatross was awarded the Neil A. Armstrong Aviation Heritage Trophy as the Overall Grand Champion of the show. The perpetual trophy, features a plaque engraved with Joe’s name and the year the Albatross was manufactured, to be displayed in the Smithsonian’s National Air & Space Museum’s Steven F. Udvar-Hazy Center at the Washington Dulles International Airport in Virginia.

“It had been judged Best Large Aircraft in 2013,” says Joe, “This year, it was judged again and won the Overall Grand Champion.”

What made the difference?

In 2015, the Albatross flew to Duncan Aviation and was fitted with its interior, which included sound-dampening materials. The Duncan Aviation production team, following the plans of Joe’s freelance designer, Bruce Shoemaker of SDesign.aero, put in numerous passenger accommodations. The crew also built two galleys, a lav, and interior panels and installed LEDs, USB plugs, dome and task lighting, and new gaspers. They updated the cockpit with side ledges and a workstation.

Invoking the design style and materials used in the period in which the Albatross was manufactured, the interior even featured refurbished seats that were made from vintage Grumman parts. Although LEDs were used throughout the interior, the designed and fabricated adapters retained the aircraft’s vintage light lenses and switch bezels. 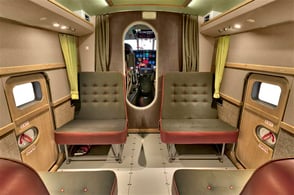 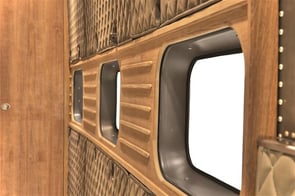 “The only difference was the interior completed at Duncan Aviation,” Joe says. “I think that pushed it over for the judges.”

“Finishing the Albatross interior was the perfect way to showcase the talent and craftsmanship of our Interior and Cabinet Shops,” says Duncan Aviation Matt Spain, Senior Sales Representative of Completions & Modifications. “And, now, getting to watch as the rest of the world sees and appreciates our work is a huge bonus.”

Our time-lapse video captures the progression from the pristine but empty cabin and cockpit to the newly completed interior.