An Interior For The Albatross 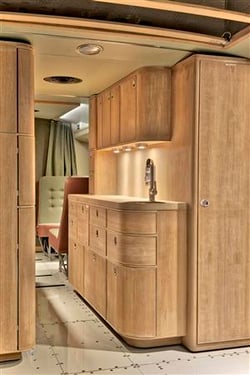 In April 2015, the 61-year-old amphibious aircraft landed at Duncan Aviation’s Lincoln, Nebraska, facility to get fitted with its new interior—or, more accurately, an interior.

In addition to installing sound-dampening materials, the production team, following the plans of the owner’s (Joe Duke) designer, Bruce Shoemaker of SDesign.aero, put in numerous passenger accommodations. The crew built two galleys, a lav and interior panels and installed LEDs, USB plugs, dome and task lighting and new gaspers. They updated the cockpit with side ledges and a workstation.

“It’s evident that everyone here at Duncan Aviation cares. The attention to detail is unmatched,” says Joe. Gesturing toward the galley, he adds, “Look at the quality of the cabinetry, and they were difficult to build.”

Our time-lapse video captures the progression from the pristine but empty cabin and cockpit to the newly completed aircraft interior, designed to invoke the style and materials used in the period in which the Albatross was produced.