Taking To The Skies for RVSM

When he’s not working as an inspector for the parts manufacturing and fabrication departments, Duncan Aviation’s Randy Dill takes to the skies.

He has been part of an FAA mandated program called Reduced Vertical Separation Monitoring since 2003. “RVSM”, as it is known, is a process defined as the reduction of vertical space between aircraft from 2,000 to 1,000 feet at flight levels from 29,000 feet up to 41,000 feet. RVSM was implemented as a means to increase airspace capacity and fuel efficient flights. 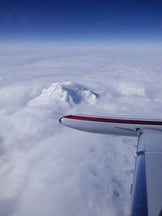 Randy embarks on flights around the United States, relaying height monitoring data to the FAA and providing certification to the autopilot systems of different aircraft. Anything that flies between 29,000 and 41,000 feet has to have their auto pilot re-certified every 2 years or 1,000 hours, whichever comes first.

“I’ve completed around 715 flights all around the country since I started,” Randy said. “Most of the time I’ll get a call from someone working at a Duncan Aviation satellite avionics shop, saying they need a customer’s aircraft to go through the process, so I’ll head up to wherever and figure things out with that customer.” This year Randy has already made stops in Denver, D.C., Nashville, and several other cities.

CSSI is the company who supplies Randy with the technology to conduct these in-flight operations. The equipment and program is run by the FAA. A GPS monitoring unit (E2 GMU) is what Randy uses during flights. He puts antennas on the windows and floors of the plane in- flight and tracks the auto pilot at altitude for half an hour. The floor antenna tracks the jet’s transponder. The data from the machine is sent by Dill to CSSI and FAA. The flight is tracked from several centers, while monitoring the altitude and atmospheric conditions.

An iPad is built into the monitoring unit to display the data, including satellite positioning, air speed, and altitude. Randy doesn’t have a problem fitting it in the overhead compartment, but has to have it inspected each time he goes through security.

“In all the years I’ve been doing this, only 3 flights have failed,” Randy said. “A Learjet 55 had a hard drive crash and the other two had computer issues with data, so we’ve been pretty accurate and fortunate to have those results.”

Aside from his duties with Duncan Aviation, Randy is an instrument rated pilot along with having a unique and exciting job on Nebraska Cornhusker game days, working as a spotter for the public address announcer at Memorial Stadium in Lincoln, Nebraska.

Cabin Experience: Unlike Any Other

For nearly 30 years, Duncan Aviation has led the industry with custom completions solutions for a large variety of business jet cabins. Our designers are experienced in creating stunning aircraft interiors that meet the needs of aircraft operators as well as the restrictions that are often placed on such small spaces. Beautiful designs are combined with expert production, innovation, and quality. The result is a cabin experience unlike any other. 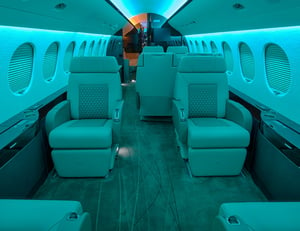 The modern aircraft cabin requires a combination of quality material with the latest technology and in-flight entertainment. When planning for your cabin experience, it’s important to keep in-mind things such as configuration, management systems, seat design, lighting, interior soft goods, connectivity, and so much more.

Aircraft cabins designed and customized by Duncan Aviation include a wide variety of features and benefits.

Your aircraft cabin should make you feel at home. Comfort, productivity, and identity are all key components of the perfect cabin experience. With Duncan Aviation, that dream can be realized. 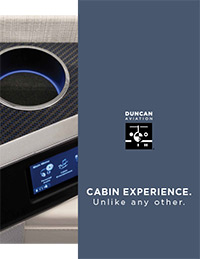