In August of this year, Thriveni Earthmovers arrived with their aircraft at Duncan Aviation for a large multi-shop maintenance/upgrade event. Chris Neaves, Thriveni’s Director of Flight Operations, took the time to send the following letter to Andy Fernandes, Duncan Aviation Regional Manager to India, and Rich Jones, Duncan Aviation Project Manager, regarding their experience. We decided to share these remarks because although we can say we hold ourselves to a higher standard of service than other service providers in business aviation, nothing says it quite like our customers do. 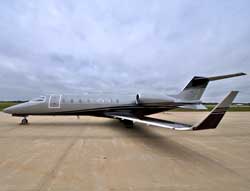 On behalf of Thriveni Earthmovers, I would like to thank you and the mechanics of Duncan Aviation for your work on our aircraft.

We appreciate that you were able to work with a moving input date and remain flexible enough to take us with just a week’s notice. As you know, we came out of a nightmare-like situation where we had to take the aircraft to the manufacturer’s facility for some upgrades only they could perform. After a four-week overrun on their time estimate and a higher bill than expected at the manufacturer, we were relieved when we arrived at the Duncan Aviation Battle Creek, Michigan facility.

Everything about the whole Duncan Aviation experience—from the moment we arrived on the doorstep to day of departure—was amazing. Nothing was too difficult, and everyone was pleasantly open and forthcoming with both good and bad news as we completed the B, C and D check, Export Certificate of Airworthiness, repaint, a gaggle of new avionics and interior refurbishment work.

Convenient doesn’t even come close to describing myDuncan.aero and the phone app. I was able to go to the other side of the planet while still communicating with everyone at Duncan Aviation, receive photographs and explanations of issues, as well as approve and deny work orders. The website was great at describing the current expenditure and the progress when we weren’t actually onsite.

Also, no matter who you are, how big or small your aircraft is, everyone is treated as if they are Duncan Aviation’s number one customer. Any issues that arise during the work are dealt with instantly, and the attention to detail is amazing.

Our airframe work was suburb and your mechanics’ attention to detail was outstanding. Actually, every department at Duncan Aviation we worked with impressed us, including interior, paint shop and avionics. Having team members who are so skilled in their trades is quite an asset for both Duncan Aviation and aircraft owners. We experienced a significant savings when the scratches on the wood and the stains on the window shades were removed, leaving our aircraft looking nearly new. The full metallic exterior repaint of our aircraft turns heads. It is a perfect application without a single drip of paint. We are impressed with the aircraft’s overall appearance. The end result exceeded our wildest imagination. Also, your ability to modernize our entertainment system, integrating the new with the old means we now have a system where every cabin seat can listen or watch their own individual selection, or surf the internet, or both—something you never see in a jet this size.

Considering the scope of work, the timeframe we had available and the added full repaint, we were astonished that we came out a day early with a refund, not a bill.

Normally when you do this much work in a short span of time like we did, the last couple of days are a mad rush and it’s a flurry of paperwork to complete, bills to pay and a scramble to ensure nothing was missed, but not at Duncan Aviation. We encountered the simplest, smoothest experience at the end I have ever seen. It also helps that people at Duncan Aviation think ahead, treat the plane and work as if it’s their own aircraft and don’t leave anything to the last minute.

The quality of the Duncan Aviation workmanship was apparent when our aircraft was released for service just a couple of hours before our departure, and we were able to fly to the other side of the world without any faults or problems. Our aircraft performed flawlessly and flew like new, and it still does a month later.

We are starting the process for our next aircraft purchase and will not even consider looking anywhere else but Duncan Aviation for the work on it. With your new Indian DGCA maintenance approvals, we will also be bringing the aircraft back for future maintenance work.

Complete service facilities are located in Lincoln, Nebraska, and Battle Creek, Michigan. Additional locations include Provo, Utah, and 27 other facilities strategically located throughout the United States to provide customers with local support and the quickest response to avionics, engine and airframe Aircraft On Ground (AOG) situations.