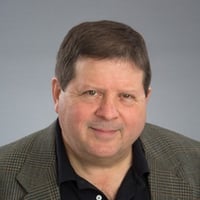 In 1978, Phil Porter was hired as Duncan Aviation’s first logistics manager; although, at the time, he was called a parts runner. Nearing the completion of his fourth decade at Duncan Aviation, Phil took some time to reflect on his long tenure with the company.

“I was going to UNL when my girlfriend Cindy took me up in her Cessna 150,” says Phil. “We dropped in on the Duncan Aviation ramp, and I was enamored of the place. Right then, I decided I wanted to be a part of it, so I changed my plans to head home to the Chicago area. Cindy and I got married, and I applied here for a job.”

Phil was both the aircraft parts runner and the shipping department back then, and he had to physically search shelves for parts. There were no computers or inventory control back then.

“And I personally packed up and shipped everything that left the company,” says Phil. “I’d call Trailways bus to find out the schedule and then drive the packages to the depot.”

One time Phil was unable to find a way to ship the horizontal stabilizer to Wichita, Kansas, for singer Paul Anka’s Learjet, so he packed it into his car and drove it there himself. Leaving Lincoln at 5:30 a.m. on a Saturday morning, Phil arrived at the Learjet facility about five hours later. He drove up to the main hangar, parked in the late Harry B. Combs’ [President of Learjet from 1971 until 1982] parking space, and looked for someone to help unload the stabilizer.

Although driving a stabilizer from one state to the next was somewhat unusual for a parts runner, Phil’s story illustrates how Duncan Aviation and its team members literally go the extra mile for customers.

Shipping parts to Mexico, Canada or anywhere in the world in the late 1970s was fairly unusual, too, because most of Duncan Aviation’s parts business involved Learjet aircraft, and Phil remembers that those parts shipped primarily in the United States.

There were notable exceptions, however, and in 1966, 10 years after Donald Duncan founded Duncan Aviation, Donald and Harry Barr partnered with Danish Pilot Captain Per Alkaersig to supply radio packages for Cessna aircraft that flew in the Scandinavian countries.

“Through our Piper parts agreement, I meet not only Piper dealers in Pennsylvania and Florida, but also made connections with companies in places like England, South Africa and Sweden,” says Phil. “We started dealing those parts in 1984, and we shipped quite a lot to Italy and Madagascar and to all of the little mom and pop shops around the world that needed parts for Pipers.”

Although Phil had been promoted from parts runner to sales around 1981, the worldwide parts distribution took off with the Piper deal, and in 1984, Duncan Aviation’s AvPac was born. Now known as Parts and Rotables, the annual sales of parts outside of the United States represents about 35 percent of all parts and rotables sales.

Shirley Crouch and Tyler Stone work through the night so they can answer calls from customers in Australia and southeast Asia; Carol Hunt and Hannah Bodenstab support customers in South Africa; and Phil, Lance Tophoj, Jewell Chambers and Sandra Phelps support customers in Europe and South America. Sandra begins working at 4 a.m. so European customers can reach an actual person at the start of their business day.

In the early day, Phil sold Piper parts, and one of his first customers was Pilot John Egelykke who worked for a pump factory in Denmark called Grundfos. Per introduced John to Duncan Aviation in 1986, and John has been working with the company at its various locations ever since.

“The European aviation industry is a closely knit community. When you help customers locate parts or resolve problems, they remember you,” says Phil. “Over the years, in spite of the fact that some of my best customers have switched from one company to another, they remember that I helped, and they continue to call.”

John got to know Phil shortly after his first experience working with Duncan Aviation.

“Phil has been a great person to work with over the years. He has helped me a lot with AOG parts and a great number of quotes,” says John. “When Grundfos changed their aircraft management company to Air Alsie in 2011, I suggested taking the Falcon 2000 to Battle Creek for a C-check. I have always enjoyed working with Shawn Busby and Tom Burt, too.”

John stopped flying after 30 years and 14,000 hours as a pilot, and he now works as a Technical Advisor for Air Alsie. And he still recommends Duncan Aviation to his customers in large part because Phil took the time to forge a friendship on top of the business relationship the two men developed so many years ago.