This morning, J. Robert Duncan, Chairman Emeritus of Duncan Aviation, was awarded the Lifetime Achievement Award from the Aircraft Electronics Association at the organization’s international convention and trade show in Orlando, Florida.

However, less known is the story of how Robert transitioned the small, family business from its modest beginnings into a company with a respected presence around the world.

In 1956, when Duncan Aviation opened its hangar doors, 14-year-old Robert was there.

“I was there doing minor things, working on the line, and I joined the company full-time after graduating from Northwestern in 1965,” says Robert. “Harry Barr had been like a big brother to me when I was growing up. He taught me how to fly, and I got my pilot’s license as soon as I could. I was taking lessons when I was 15 and soloed at 16. After getting my private license when I was 17, I kept right on flying and got my commercial license at 18. It feels like I’ve always flown, and I just love it.”

Piloting a plane lets Robert detach himself from daily demands and get up where it’s quiet; he loves going fast and seeing the world in a whole new way.

Robert’s passion for flying helped him relate well to customers and employees alike. In addition to enjoying the freedom of actually flying, he also loved the mechanics, avionics, and power of airplanes. Growing up, Robert had helped his father put away, clean, and work on airplanes for as long as he can remember.

In the early days, when Duncan Aviation was a Beech distributor, one of Robert’s jobs was to go to Wichita, Kansas, and fly the new planes to Lincoln. He flew Bonanza Barons, Twin Bonanzas, and Beech 18s.

Now Chairman Emeritus of Duncan Aviation, Robert still enjoys the speed and the freedom of flying; he flies a Mustang and an M2.

“I love those airplanes, especially for the avionics equipment,” says Robert. “They give me the ability to fly myself and do so in a very safe way.”

The dreams Donald and Harry had for Duncan Aviation were shared by Robert from early in the company’s history. Donald, Harry, and Robert started a helicopter business in western Nebraska, and Robert says his father and Harry taught him to always take advantage of new opportunities, to look for new products that will serve customers better, and to stay active and involved in the community.

“My father instilled in me an attitude of growth and opportunity,” says Robert. “I was always on the lookout for new adventures, new airplanes, and new opportunities.”

“Dad and Grandpa said you always had to take care of the fundamentals. We’re a small business, in a small industry. We don’t make the airplanes, but our business is about everything that comes after that,” says Todd. “Create a cooperative environment, don’t create silos, and don’t run things like dictators. We work in an industry that requires collaboration and teamwork, so we have to foster that every day here at Duncan Aviation, too.”

In 1981, when Robert was 41 years old, his father died suddenly. Donald’s death shocked the entire company, and especially Robert.

“We were in the midst of pretty tough times. Inflation was high and interest rates were astronomical; our business was weak,” says Robert. “We needed new enterprises and new opportunities for our employees.”

Donald’s focus had been sales, and Robert knew he had to grow the business in other ways. He recruited talented people to run new endeavors, and one of them was the Interior shop. There was no design center or cabinet shop, yet, but the small shop fixed broken seats and installed carpet, headliners, and side ledges. Robert envisioned much more, and he recruited Jeannine Falter to head the shop. 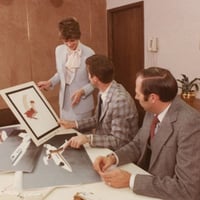 “I had been working for Learjet when my 47-year-old father had a heart attack, so I decided to accept the Duncan Aviation job offer and move back to Nebraska,” says Jeannine. “I gave my notice and said I was going to work for Duncan Aviation. People at Learjet took me aside and tried to talk me out of it. This was shortly after Donald had died, and they didn’t think the company would survive. They underestimated Robert and his entrepreneurial talent. He’s smart, open to new ideas, and willing to take risks. I’ve never regretted my decision to work for Robert.”

In the following years, Robert envisioned several more advances that not only created new avenues of business for Duncan Aviation, but also grew the company and spread its name and reputation around the world. Among the ideas that Robert conceived of were AVPAC and the Duncan Aviation satellite avionics facilities.