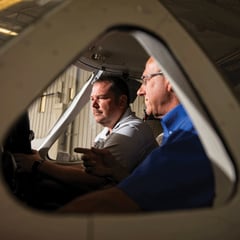 DOM Greg Donegan, at Cincinnati, Ohio-based Cin-Air, had an inspection due on a G-200 in October 2016. While it was down, he had the Duncan Aviation techs from the Satellite Shop at Lunken Field in Cincinnati cross the ramp from their hangar to his and upgrade the G-200’s avionics equipment for ADS-B.

Greg has worked on aircraft at the Cincinnati, Ohio Municipal Airport for 30 years, and he has his own maintenance and inspection crew for his fleet of six aircraft. However, he now relies on Manager Bruce Miller and the proximity of the Duncan Aviation Cincinnati Satellite Shop for avionics repair, installations, and upgrades.

Three of Greg Donegan’s six airplanes have had the necessary upgrades for the FAA’s ADS-B (Automatic Dependent Surveillance-Broadcast) mandate, and he has two others scheduled. He knows exactly when the deadline for ADS-B is, and Greg intends to have all of his aircraft completed long before that.

“We didn’t want to wait until the last minute and get burnt,” says Greg. “The deadline isn’t going to change, and we don’t want to be on the outside knocking on the door, waiting to get in on Jan. 1. My goal when I took over as DOM last year was to have the entire fleet upgraded at least a year ahead of the deadline.”

The skilled technicians at the Duncan Aviation Satellite facilities and workaway stations have upgraded hundreds of aircraft, so they’re ADS-B-compliant well before the midnight deadline on December 31, 2019.

Located at 27 of the busiest business aviation airports around the country, most have hangars in which they can perform the upgrades, but all Satellite facilities and workaway stations have technicians who will travel to your hangar, particularly if your aircraft is down for routine maintenance. The upgrade itself usually takes less than two weeks, so getting upgraded for ADS-B while your aircraft is already undergoing engine work, an inspection, or any other routine maintenance means you only put it down once.

To schedule an ADS-B upgrade at one of the Duncan Aviation Satellite Avionics Shops near you, call any of the Satellite shops (www.duncanaviation.aero/locations/#satellites) or Regional Avionics Sales Manager Mark Francetic.