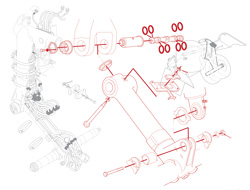 WOW: An Overlooked Cause of Many Nose Wheel Steering Faults 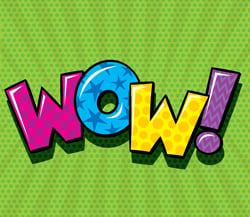 Don't overlook the Weight On Wheel or WOW system when troubleshooting systems faults.

When experiencing an intermittent nose wheel steering fault, the first thought is generally, “what is wrong with the steering servo, computer, valve, actuator or strut?” But don’t overlook a very important part of the system—Weight on Wheels (WOW). This system is very easy to test and replace. It has been my experience that WOW is the cause for more than half of these types of faults.

Most aircraft utilize some type of WOW Sensor or Switch that activates when the aircraft is on the ground. They come in many different sizes shapes and technologies and can be in various positions in the aircraft and landing gear. The one thing they all have in common is they complete the circuitry required to do many other things on the aircraft. From thrust reversers to nose wheel steering and many in between, the aircraft relies on these switches to operate correctly. A faulty or incorrectly adjusted switch/sensor may cause vital systems to not function or function intermittently.

Systems that are run through the WOW system are exclusively used either in the air or on the ground, not both. Systems that utilize the WOW system include but not limited to, thrust reversers, nose wheel steering, trim and autopilot.

The reason for these inspections is to check for cracks, wear and corrosion. Years of water, dirt, salt air, fluid and various other electrolytes have taken their toll. The gear is very susceptible to corrosion and even though steps may have been taken to lessen the effects, some corrosion still forms.

Corrosion is normally found throughout the gear but can often be repaired using standard repair schemes available in the CMM or through engineering concessions. Sometimes, however, the corrosion has exceeded the limits of those repair tolerances.

Some of the more severe corrosion found during these inspections is detailed in the following photographs.

*Percentages are based on Duncan Aviation data. 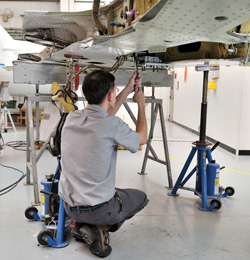 A unique Duncan Aviation solution saves the customer more than six months of downtime and a significant amount of money.

Due to its location and exposure to the elements, landing gear is highly susceptible to corrosion. And corrosion, even in small amounts, will not stop growing until it is effectively removed. If left unattended, landing gear corrosion can grow and jeopardize the functionality and airworthiness of the unit leading to expensive repairs or the premature removal of components.

As a Learjet (non 40/45) owner/operator, I want to advise you of a corrosive situation that can occur on all Learjet model aircraft, excluding the 40/45. These aircraft are susceptible to corrosion in the sockets for the main landing gear forward trunnion pins on the bottom side of the wing. Corrosion in this area is serious if left unattended, with the potential to cause cracks in the weakened casting and eventual failure resulting in a potential gear collapse.

Replace Trunnion Castings. To replace trunnion castings, the wing will need to be de-mated and shipped to the OEM in Wichita, KS. There it will be placed in the production wing fixture to remove the upper skin and replace the trunnion castings. Depending on the demand for the fixture, we have seen downtimes as long as six months and at a significantly high repair cast.

Remove Corrosion from Trunnion Casting. Without having to remove the wing, Duncan Aviation is able to remove the corrosion with an on-wing fixture that allows qualified airframe technicians to bore the trunnion and insert a bushing, while staying within allowable limits. This repair process generally takes only 5-7days to complete, eliminating the need for wing removal, shipping, months of down time and at a dramatically less overall cost.

If there is sufficient Ground Support Equipment (GSE) available at your location, this repair can be performed in your hangar by Duncan Aviation’s Engine AOG Rapid Response Teams.

You can read more about this innovative on-wing fixture in the Duncan Debrief. If you have any questions about this or other Learjet technical issues, contact me at anytime. For scheduling and pricing information, contact Learjet Airframe Service Sales Representative Brad Lennemann. 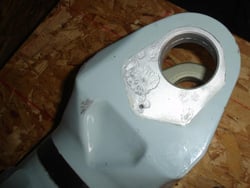 Corrosion on the MLG casing. 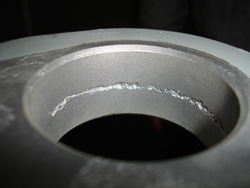 Corrosion in the pintle pin bushing boss of the MLG casing.

Messier is aware that the current configuration and greasing procedure of the main landing gear (MLG) main fitting may not allow grease to be forced into the joint between the MLG main fitting and trailing link assembly. The lack of grease on these parts can lead to abnormal and excessive wear on the bushings. A supplemental greasing procedure and associated tooling has been developed by Messier to lubricate this joint. The procedure will allow grease to reach the affected areas, but is somewhat cumbersome to perform.

Messier and Bombardier are in the process of releasing Service Bulletins that improve the bushing design to eliminate the need for a supplemental greasing procedure. It is recommended that this improvement be installed during the next 96-month or 192-month inspection interval.

While the bulletins have not yet been released, the improvements can be implemented and approved through a Messier concession and subsequent Bombardier SRPSA approval. Consider these improvements and the next scheduled inspection to prevent further or future problems with the MLG that could lead to costly repairs or even more costly replacement. Contact Duncan Aviation's landing gear experts for more information.