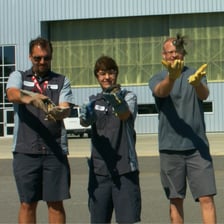 Earlier this summer, three American Kestral Falcons attempted to take their maiden flight out of the nest that was high in the rafters of a Duncan Aviation maintenance hangar. Unfortunately, they didn’t make it far and landed on the floor.

They were discovered, rescued and taken to the Fontenelle Forest Raptor Recovery Center in Elmwood, NE, where Elaine Bachel, center volunteer, fed and cared for them.

The Raptor Recovery Center sees between 450-500 birds of prey, such as eagles, falcons, hawks, owls, and vultures, in need of immediate assistance every year. They rely on concerned citizen to report the injured raptors and a network of dedicated volunteers across the area to receive the calls and then potentially drive countless miles to retrieve the birds and get them back to the trauma care unit. The birds are evaluated immediately upon arrival and if necessary, provided treatment, medication, and surgery by trained professionals. Once the birds are healthy again, they are banded and released back to the wild near where they are found.

Elaine said the falcons discovered at Duncan Aviation were uninjured and just needed a little bit more time to grow and get stronger. After only a few weeks, she brought the birds back to Duncan Aviation where some of the technicians who found them were able to release them.