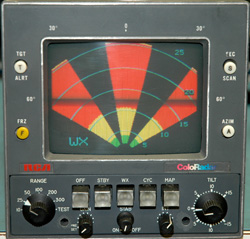 Spoking is a general term used when a radar system fails. You can determine which part of the system is causing the problem based on what appears on the radar display.

The most common type of spoking is caused by the magnetron or local oscillator. This occurs when they lose lock and do not track with each other. This will typically appear on the radar display as a pie shaped patch and will only be present if there is weather to be shown. This would be a receiver transmitter problem.

Another type of spoking comes from the antenna and is caused by noise from the sweep resolver. This will normally show up on the radar display as a very thin line that will start at the apex of the screen and continue to the edges, no matter which range you are on. This will almost always appear in the same spot on the screen.

Intermittent connections on the antenna can also cause the antenna to pitch up or down causing spikes or humps within the return. This is a common problem for the Primus series of antennas.

Also remember, the winter season is a great time to get your radar unit tested and ready to go prior to spring, when thunderstorms are more prevalent and radar is used most. Take advantage of Duncan Aviation’s Winter Radar Promotion and get $100 off radar servicesincluding functional checks, evaluations, repairs and overhauls through March 31, 2014. To redeem, print and include the $100 rebate with each radar unit shipped.

If you have questions about your radar's operation or how environmental testing will help your radar's reliability, contact Duncan Aviation avionics tech reps.